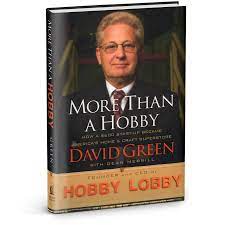 As a long time, artist, I’ve shopped at Hobby Lobby for years and have always wondered about how the company runs because it doesn’t matter if you are in Texas, Arkansas, or another state, it’s easy to find what I’m looking for in a Hobby Lobby store.

After watching an interview of David Green, founder of Hobby Lobby on a recent business show, I was impressed with his integrity and decided to purchase his autobiography so that I could learn more about the company and what makes it tick.

Hobby Lobby is a great example of the American Dream because the company started on a small budget of $600 and decades later is worth billions.

More than a Hobby is a book that’s a ‘how to’ manual for anyone who is interested in getting into retail.

From start to finish, David Green lays out his thoughts from starting small with his first 300 square foot store in Oklahoma City to where the company is today.

Still The Same Guy That He Was in The Beginning

Like Sam Walton, founder of Walmart, David Green has remained humble over the years and knows that there’s more to life than just building his fortune. This has led him to making huge contributions to the communities where Hobby Lobbies are planted nationwide, and he personally has given millions to charities worldwide over the years as well.

Unlike some CEO’s who rush to take their companies public, Hobby Lobby has gone the opposite direction over the years and has stayed a private company.

This is made it possible for them to keep their management decisions in the Green family and make decisions without having to consult a board.

A Company That Knows Their Customers

Over the years, Hobby Lobby has morphed into a small group of ancillary companies that are all in different sectors of the home furnishings space.

Green purposely took this approach after learning from his mistakes of trying to sell high ticket furniture and items from Hobby Lobby during the 1980’s and experiencing huge losses with the crash of the oil market.

Knowing his customers is the reason why Hobby Lobby has each store down to a science and it’s why you can find exactly what you’re looking for in their stores regardless of where you live in the United States.

Contrast this to Walmart where their stores may have a similar layout but it’s highly likely that what you find in one Walmart may not be available in the other.

This is a largely annoying trend, especially if you have different dietary requirements and can find the foods that you need in one Walmart but not in another of their stores the next town over.

In recent years I’ve realized that one way to be successful as an artist is to move in the direction of creating my other products so that they can produce a side income stream for my business.

This has led to ups and downs of course, but as I move forward I’m realizing what works, what doesn’t work, and I’m learning to create products out of my art that people enjoy.

Most important of all, I learned from the book that it’s important to stick with your principles, know what you will or won’t settle for and keep God at the center of everything that I do.

This hasn’t always been easy to go, especially when I was younger but as I grow older I realize that being a man of character and principle is the most important thing to me because I want to be an artist but also an artist who leaves a legacy that pleases God as well.

Knowing the character of Hobby Lobby’s CEO makes me appreciate the franchise even more and I look forward to reading David Green’s book again to absorb valuable business principles again in the future.